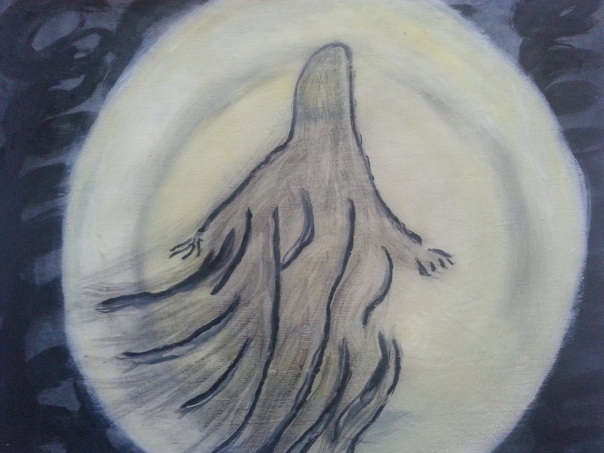 I painted this “Dementor” on 9.5″x7.75″ piece of birch wood. Inspired by the Harry Potter book, Harry Potter and the Prisoner of Azkaban. Using acrylic paint, once dry the piece was covered in gloss, for a glass look (difficult to see in the photo). The Dementor is set in front of the full moon, just after Prof. Lupin transforms into a werewolf.

I found this unique, hand made ring at Juniper Tree Vintage, in Alameda, Ca. $10.00 on sale! I wanted to buy all the jewelry there, but I controlled myself 🙂 They have so cutest clothes there as well!
Check out their Facebook page facebook.com/junipertreevintage 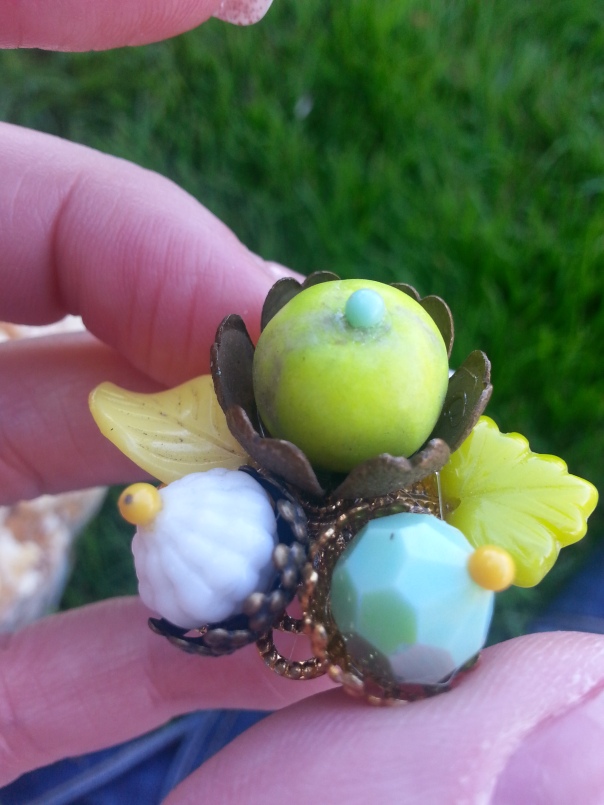 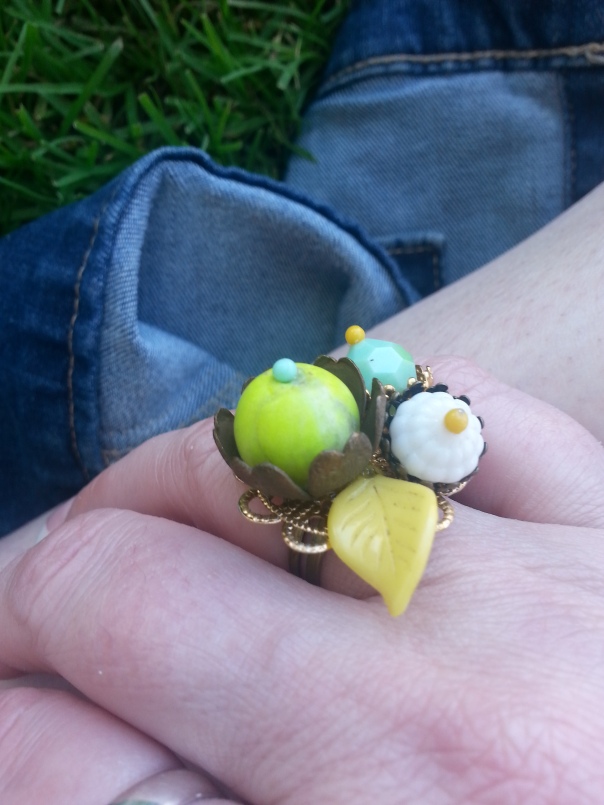 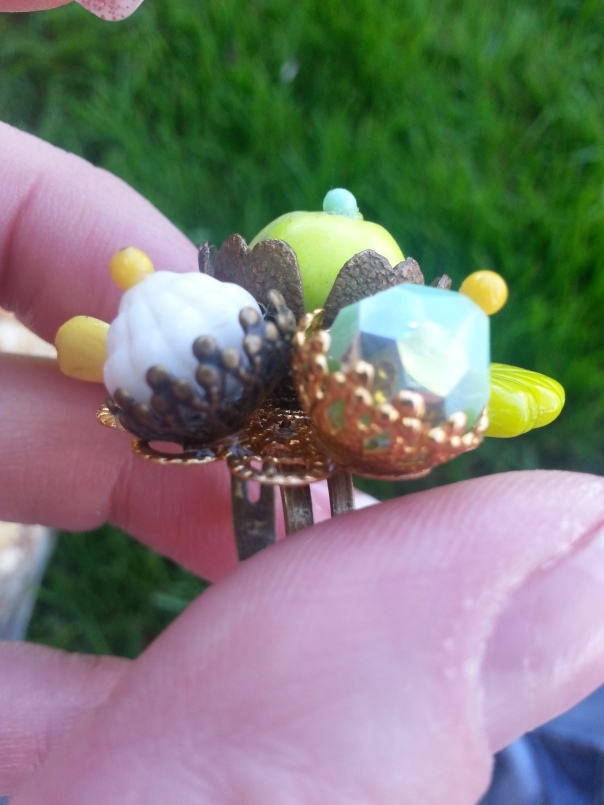 This was my first time to a Japanese restaurant, shame on me! There was fried tofu, tempura veggies, rice, melon and a salad. The meal was quite generous in size, really enough for two people. At only $11.00, I thought this was very reasonable.
Sushi House-Alameda, Ca
My daughter and her boyfriend, Pat, pictured above 🙂 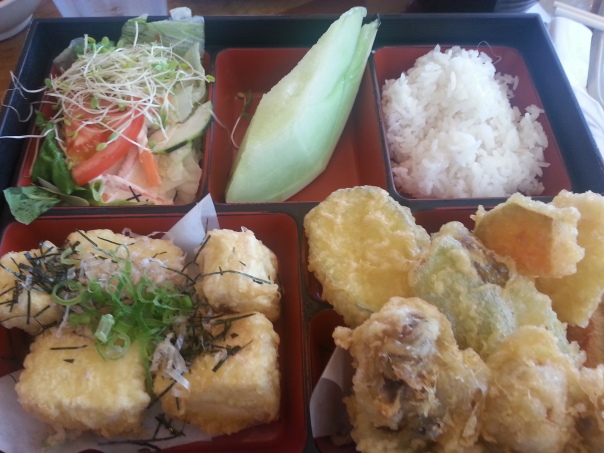 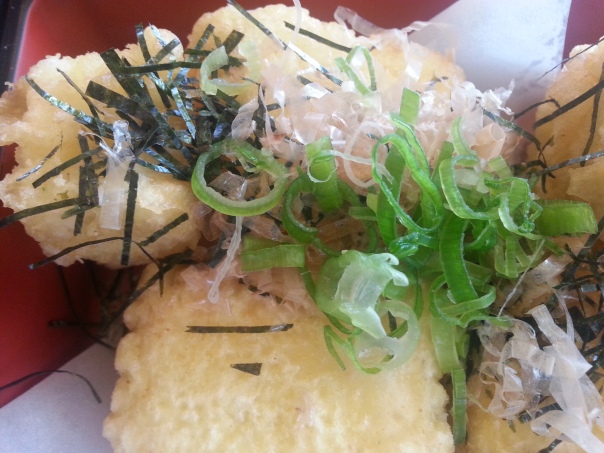 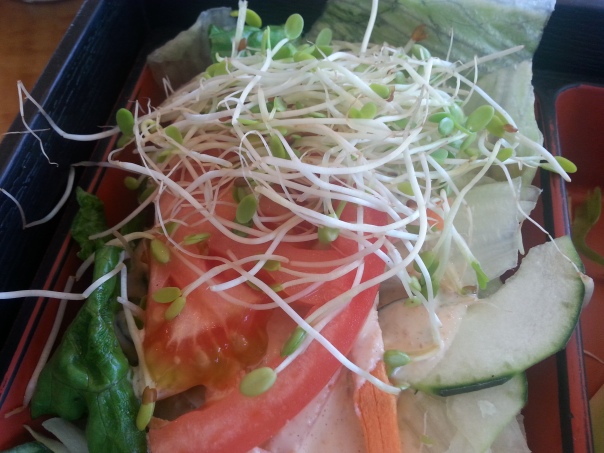 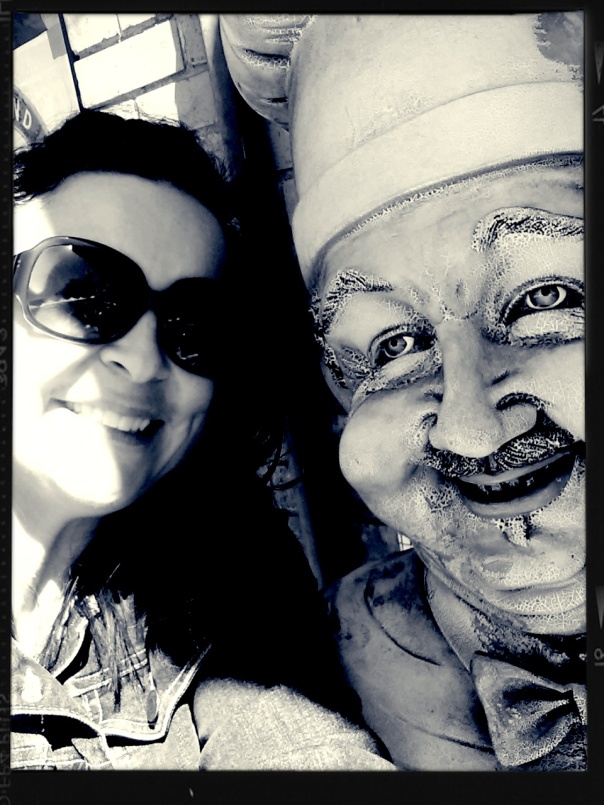 I was at an Art and Wine festival this week-end in Alameda, Ca. It was pretty warm for the area, loud, crowded, no where to sit. My daughter was starting to get over heated when I found a little Italian man holding a welcome sign to a restaurant. He was tucked in a little tiny bit of shade. He was very nice, so I took a selfie with him, hahahaha. 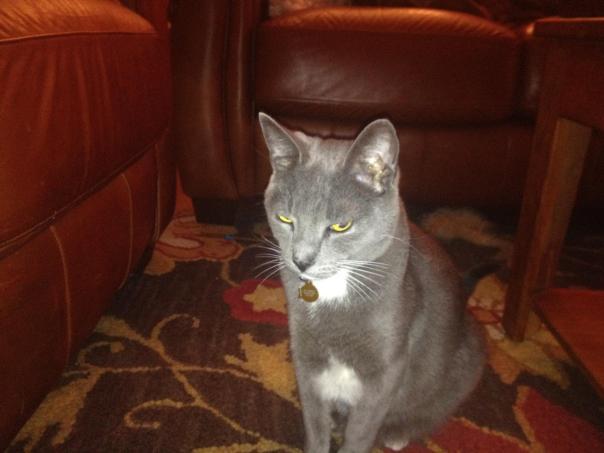 Happy Caturday! Isn’t Memphis beautiful!?! He belongs to my nieces Jessica and Katie. I haven’t met him in person , but the girls have told me that he’s quite a character, LoL! Jess and Kat wanted him to be the cat of the week on my blog, so here he is. Have a great week-end everyone 🙂 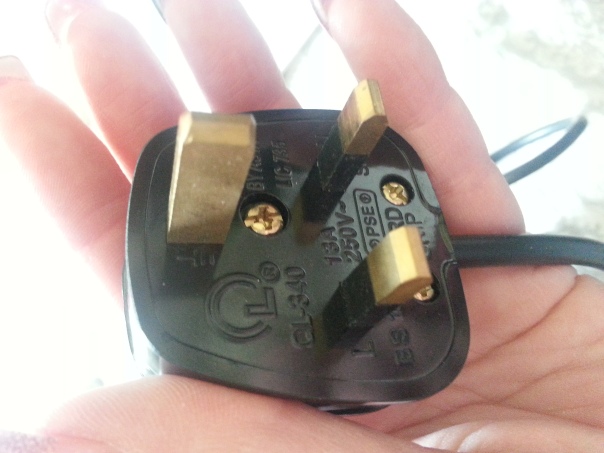 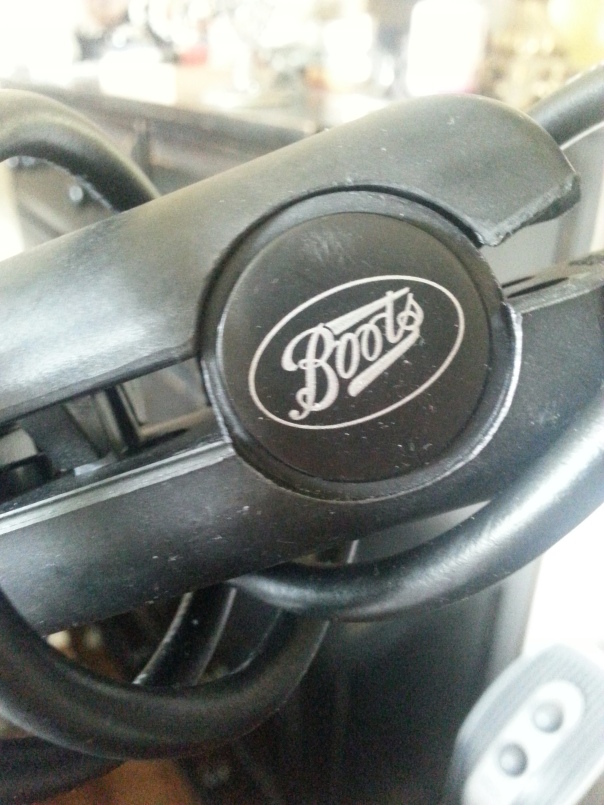 Only 6 days until I leave for London! I can’t wait!! I bought this flat iron at Boots the first time I went to London, 6 years ago. I had my travel converter, but my flat iron from the States still managed to blow out the power in my ENTIRE hotel, eeeeek, that was really embarrassing

This trip means a lot to me. I’m taking my son who’s 17 and my daughter who is 20. I’ve never taken my son out of the country before, and Sara and I can’t wait to share our love of England with him! I hope Ben’s experience in England will change his life and perspective on his life as it did for my daughter and I. 🙂 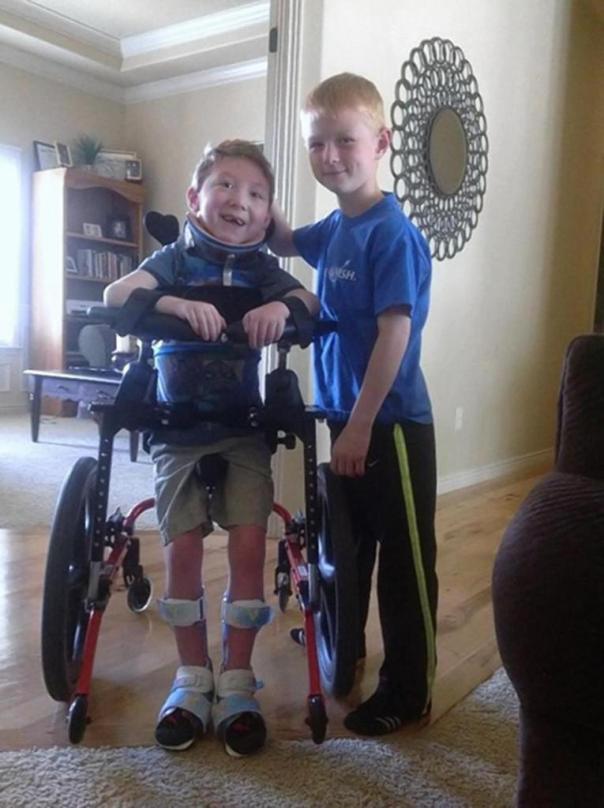 Eight-year-old Noah Aldrich didn’t want his 6-year-old sibling Lucas — who is confined to a wheelchair — to miss out on a youth triathlon this month, so he pulled and pushed his little brother the whole way as he swam, biked and ran in the sweltering heat.

His determination didn’t surprise his parents, who said the brothers are inseparable.

“They have an amazing bond. They’re best friends and they do everything together,” mom Alissa Aldrich told TODAY Parents. “The connection and the love that they share is truly unique.” 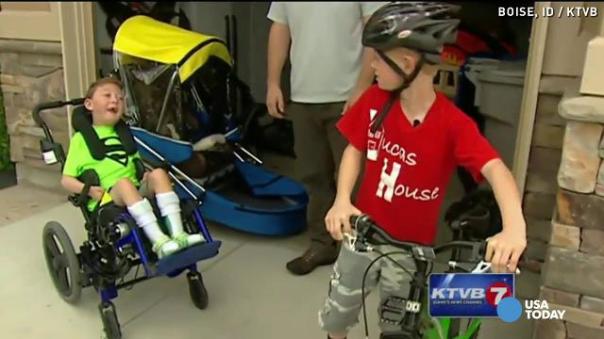 “I like everything about him, he’s perfect,” said Noah told NBC News affiliate KTVB in Boise, Idaho, about Lucas. The boys watch cartoons together and go on walks and bike rides, with Noah pushing and pulling Lucas in a special buggy.

Lucas was born with lissencephaly, a rare brain malformation. Children with the disorder… 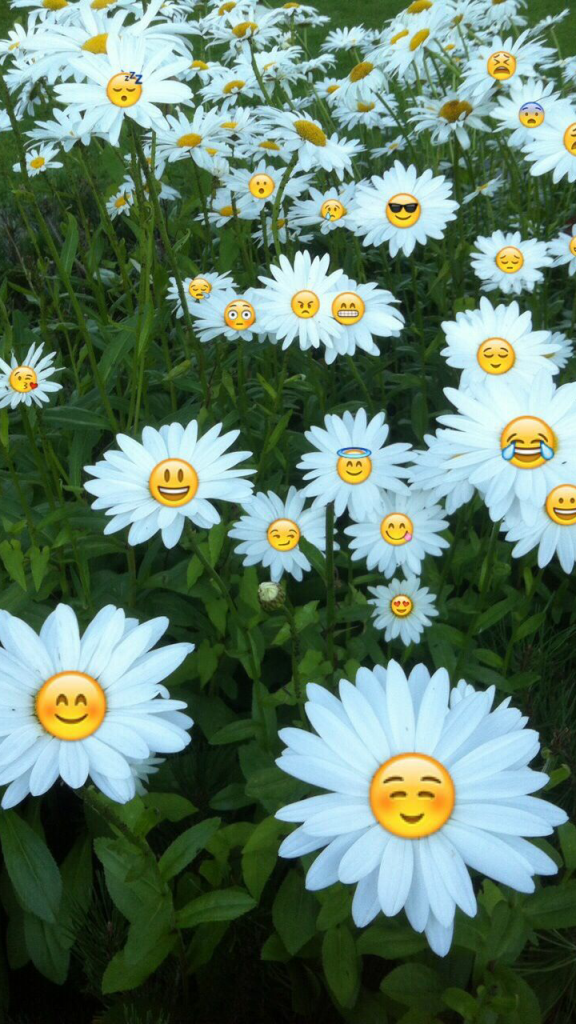 Have a beautiful day everyone!
found on eyeem.com 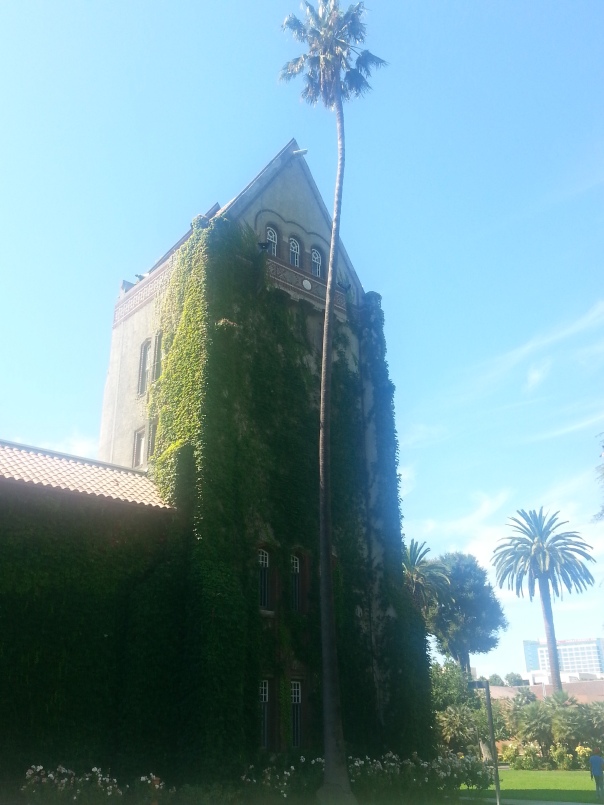 Go Spartans! My daughter had to take a test over the week-end, prior to the semester starting, so my son and I went with her, and walked around campus. The SJSU campus has both a High-Tech and an old world feel. Mixed with new, shiny buildings, you will find some of the original buildings. SJSU was founded in 1857, San Jose State is the oldest institute of higher education, not just in California, but on the entire West Coast! Can you tell that I’m a proud mommy? 🙂

I know it’s Sunday, but this “Caturday” clip is too cute not to post! 🙂